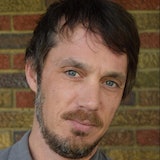 Todd Dills is Chief Editor of Overdrive magazine and works from a home base Nashville, Tennessee. He covers business, regulatory and lifestyle topics in addition to editing the work of numerous contributors to the magazine. Over the last decade and more, his work has been honored with more than a dozen Jesse H. Neal awards, among the highest honors in business journalism Those honors include the now-long-running “CSA’s Data Trail” series in Overdrive about the federal CSA program, which was the "Grand Neal" overall winner for year 2014, earning other accolades in later years. His work in trucking journalism builds on a background of news feature, fiction and other creative writing and editing. Find him via his Twitter feed, or send tips to tdills@randallreilly.com or via phone at 205-907-2481.
Overdrive Radio

In this Overdrive Radio edition out on a dry-bulk haul with Kentucky-based John McCormick, the owner-operator lays out his own and his father's different histories in trucking. Their stories converged in recent years on this regular run.
February 3, 2023
Overdrive Extra

The double brokers and ID thieves are most definitely back from the holiday vacation. Meanwhile, latest Bloomberg | Truckstop.com survey shows owners' increasingly pessimistic outlook for freight rates' immediate future, though some optimism remains.
February 1, 2023
Trucker of the Year

January Trucker of the Month Kelvin Schmidt's decade-plus career as an independent isn't, ultimately, about the trucking or simply making money. His operation's freight and rates consistency delivers profit and time back home where it belongs.
January 31, 2023
Overdrive Radio

In today's Overdrive Radio podcast, the story of how Nelms built a 22-truck fleet by including distinctly educational efforts into ops. Also hear how 30-year-old Caroline Correa clears $9K-$11K a month as a small fleet investor leased with Nelms.
January 20, 2023
Business

With borrowing costs up, use financing relationships, experience to advantage

The U.S. economy hasn't seen hikes in the fed-funds target interest rate like 2022's in well more than a decade. With those hikes flowing into commercial truck loans, this closer look at impacts illustrates the value of long-term lender relationships.
January 19, 2023
Custom Rigs

Owner-operator John McCormick and his Pride & Polish champ '21 "Bandit" Kenworth take us on a run that extends well into the night and showcases the lighting he's added to the rig, as well as many other custom touches.
January 18, 2023
Business

FTR Transportation Intelligence's monthly "State of Freight" seminar series kicked off 2023 with a close look at the trajectory of a variety of market indicators, projecting a fairly flat to down market for trucking writ large.
January 16, 2023
Overdrive Radio

If the entirety of the U.S. vehicle fleet, including owner-operators' trucks, suddenly transitioned to battery-electric, what level of electric power generation would it take? What kind of materials demands? Furthermore, how much worse would parking get?
January 13, 2023
Overdrive Extra

The story of how a personal need in 2010 brought the longtime diesel shop owner to the ultra-specialized business of houseboat hauling, which is a significant though still part-time portion of his week-in, week-out work out of Camden, Arkansas.
January 10, 2023
Page 1 of 497
Next Page
Top Stories